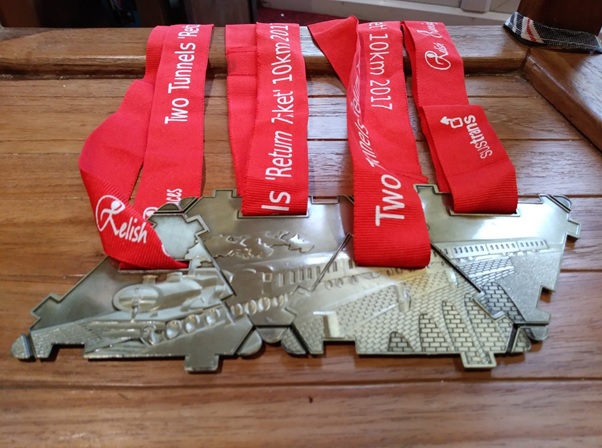 At the beginning of the year as part of my 10k race-a-month challenge of 2017 (why did I voice that out loud?), I signed up (with a certain amount of trepidation) for the Relish Running Two Tunnels Race Series in Bath. What was the appeal?

I wasn’t sure what running through the longest underground section of any UK running race would be like, but I was up for the challenge. The first tunnel; The Devonshire Tunnel is 408m long and the second Combe Down Tunnel is 1672m long. I did actually enjoy it and both tunnels acted as markers not only punctuating the route but making it seem shorter or at least go faster.  During the 10k you pass through each tunnel on the way out and on the way back.

I am surprised that there weren’t any mishaps though as the tunnels remain open to the public and that includes walkers, runners, cyclists…… The longest tunnel does have some muted lighting and even a bit of music!

I also had wondered whether or not I would get bored doing the same route 4 times within the space of six months but I needn’t have worried. I loved the route, the tunnels and the fact that I could see how my times varied across the same 10k on 4 different occasions.

The races were extremely well organised. Although there weren’t loads of opportunities for people to stand and cheer en-route, there was plenty of support at the start and finish in Brickfield Park; the races were often part of a bigger running festival so there was a good send off and welcome back.

I’d definitely recommend the race(s) and if you are interested registrations for 2018 are open for 18th Feb, 6th May, 8th July and 19th August.  More information can be found on the Relish Running website.

On a final note, I couldn’t have done this without the support of WRP and my fellow WRP runners. THANK YOU.