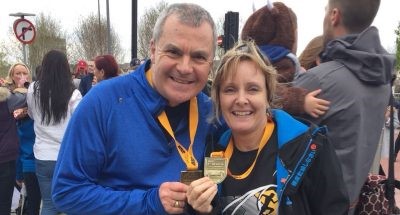 Last year, Julie wrote about her experience of Liverpool Rock and Roll Marathon as a first time marathon runner (read her story here); read on to find out how it feels the second time around…

So last year I hogged everyone’s newsfeed as the elation and euphoria of running my first marathon took hold.  And afterwards one of the most recurring questions from family and friends alike was..…would I do it again? Interestingly I wasn’t sure…I didn’t hate it, nor did I relish the thought of repeating it, and yes the jubilation of finishing was like nothing else, but the memories of the training and 4 months of being uber-organised and remembering to eat were still tangible. So I decided on some criteria: yes I would do it again… if it was local, if I got into London, or if I did it as an ‘occasion’, ie, with other family or friends. I had a disastrous Cardiff Half with asthma issues, and shortly afterwards the politics and rumours of Cardiff hosting a marathon came and went. The uncertainty of London hovered then disappeared. I was content that it wasn’t going to happen. And then out of the blue came news of the ABP Newport Marathon. Also out of the blue came my husband’s declaration that he would like to have a go! He had been very supportive when I was training for Liverpool. He would keep me fed, listen to my moaning, meet me towards the latter half of a long run, and keep me company. He’s not a runner (like me!) and was one of the many that said he could never run because of dodgy knees and a previous ACL replacement. But to his credit, he notched up the miles, and entered the half in Liverpool last year with some of our offspring and their partners. They munched pizza whilst I toured 26.2 miles of the sights of Liverpool and then we celebrated in style. And so we planned for Newport. We ate. We did long runs with the dog. And on the day itself we ran together step for step. If I’m honest there were downsides to training together…I’m a stickler for a plan, and struggled when he didn’t feel like running on a day I’d scheduled. He travels a lot and I became a bit on the OCD spectrum of checking whether he’d completed his 40 minute tempo, or managed to find suitable hills. His idea of a long run was to set off and see where we ended up. I’m more for mapping it all out and committing it to memory so I know where I’m going. He loves ‘adding on a loop’ because he’s feeling fine, I’m more likely to be crawling the last 0.1 mile to make it up to a round number. On the plus side, we learnt a lot, we spent hours more together than we normally do, and although not always chatting, sometimes just enjoying the silence (interspersed with wee-stops for the dog) and the chance of being out was enjoyable. But the weather conspired against us with the snow. He had jealously craved after my Newport half medal from last year (still one of my favourite medals!) and so we entered this year as one of our training runs. But once cancelled, and then twice, he sadly had to give up his dream of owning one for himself. With some of the longer runs not going quite to plan, and run-walking towards the end of a couple, I guessed our marathon day would turn into a bit of a slog. Our favourite run was our longest one, where we literally set off up the Taff. It had been a bitty morning, and again plans and organisation hadn’t gone quite as we’d thought. It was probably a bit of make or break psychologically, and eventually we set off about 2ish which panicked me thinking we wouldn’t be back til after dark! Amazingly we ran seemingly without effort up Nantgarw hill ..made it to Ponty park, …had a little wander round the park there and then ran home…ticking off a nice round 20 miles. The dog achieved a PB for his distance and what a boost for the morale! And at that point we knew that whatever happened on the day we would make it round. In my dreams I had hoped to shave off some minutes from Liverpool, but realistically I knew I wasn’t in the same place physically, my pace had dropped and I was missing my Thursday hills with my WRP crew. But we were going to give it our best shot. On the day we coped with 2 sets of nerves, tailbacks on the motorway and a delayed start. The weather wasn’t too bad…I’d given up watching the forecast…everything from 7° chilly with rain to the post-London 23° sun and it was all wrong! I did get very cold on the day and slowed considerably in the second half with my back stiffening up and extremely tense shoulders. I found it easier to run/walk sections whereas he preferred a slower constant pace, but that meant we did a tag-style run, catching each other up and then circling back if one was behind. One of us needed more toilet breaks than the other, but again with no pressure other than to finish the race we were happy to adjust where necessary to each other’s needs. Family members popped up out of various pit-stops which was lovely, and surprisingly I kept seeing faces I knew, either in the crowds, or running. One man shouted me a big ‘well done Penarth lady’!  But it all adds to the experience…however hard it seems on the day I am continually amazed and grateful for the people that sit outside their homes cheering total strangers, families that stand for hours giving out jelly babies, and the wonderful marshals who must have been frozen standing out there waiting for the novice tortoise runners like us to plod on by. It is an essential ingredient in what is a unique and incredible experience. 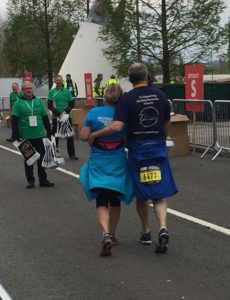 We crossed the line hand in hand accompanied by cheers and tears from family and friends. What a feeling!! There is nothing like it, and the instant it is over, you ride the wave of jubilation and the thrill of achievement. We didn’t smash any records, we ran it slower than we’d hoped but none of that matters when the memories last forever. Oh and just a PS on the hairbrush issue from Liverpool…. Amidst the flurry of hugs and photos, I remembered too late my wise words from last year. I whispered to my daughter…”what do I look like?” She replied…”you look like you’ve run a marathon” Ok…I’m happy with that I guess. 🙂   Next year’s ABP Newport Marathon will take place on Sunday, 5th May 2019.  Entries are now open and you can sign up here. Main pic: Julie and her husband with their well earned medals.