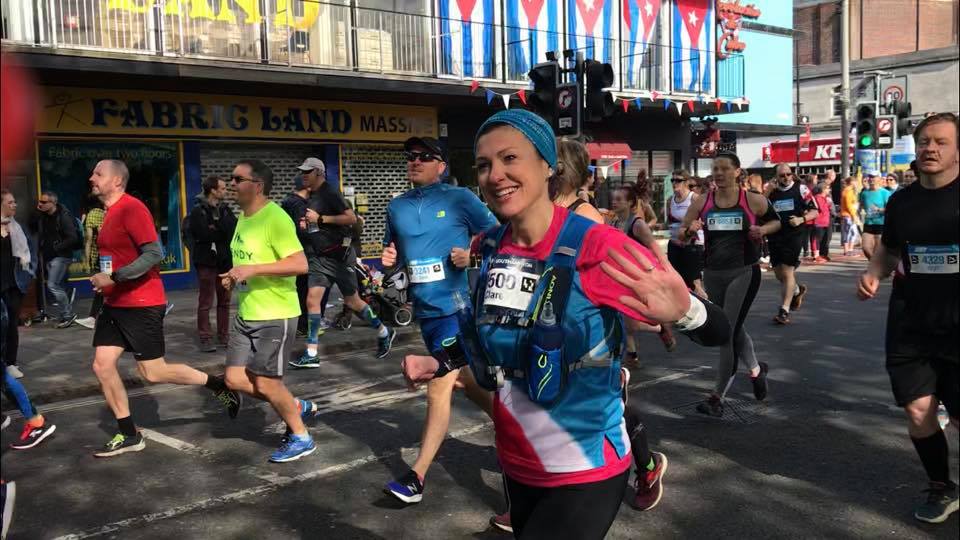 The day was perfect for the marathon – cool and sunny. I’d been busy training for the marathon for about 5 months, so why did I feel so nervous? I’d never run that far before; the longest race I’d completed was a half marathon, and the most I’d done in training was 21.5 miles so it felt like a big step.

I’d run a number of half marathons and enjoyed them so it seemed like the right time to try a full marathon. It was a long way though, and I can’t pretend that I wasn’t feeling nervous. I had no idea how it was going to go.

I’d struggled to stick with the training plan. Whilst I’d always managed to do the long, weekend run, I hadn’t done all the mid-week mileage it had suggested. I work full-time and have 2 teenage daughters so had found the mid week running pretty exhausting. I’d done as much as I could and hoped it would be enough.

I didn’t have any expectations about finishing within a certain time and hadn’t been bothered about my time – I just wanted to finish. However, I read on the website that the cut-off time to pass the half marathon point was 3 hours, and 6 hours for the full marathon. I was worried I wouldn’t complete the race in those times.

My husband and daughters had accompanied me to Southampton the night before as it was a 9am start. I had all my kit laid out and checked it was all there. However, that morning when I went to put it all on, my bra was too small! I’d packed my daughter’s sports bra instead of my own! My husband, Gareth, in true boy-scout style started getting his shoe laces out to see if he could secure the bra on me that way – but it wasn’t going to work. I had no choice, there was no way of buying a new bra before 9am on a Sunday, I’d have to run in my plunge bra.

We went down to breakfast but I was too nervous to eat much – what a waste of a Premier Inn breakfast! I managed a caffeinated coffee which I don’t normally have, hoping it would give me a bit of a boost. Telling my daughters about the bra gave us a laugh and relaxed me a bit!

The hotel was only 10 minutes walk from the start so I didn’t need to get there too early. I didn’t have to join those long race queues for the loo either- that was a bonus!

We walked to the start with half an hour to go, I said my goodbyes to the family and found the back of the pack. There were only about 1000 people running the marathon, although a half marathon was going on at the same time, it felt quite a small, friendly event. I got chatting to a couple of other ladies who had similar fears about completing the race within the cut-off time which reassured me that I wasn’t the only one.

The organisers had been announcing that our numbers had to be pinned to our chests rather than lower down. As many of us (including me) were carrying backpacks with our bottles and gels, there was limited space for our numbers on our chests as well, so we battled with safety pins and stressed about that for a bit, trying to secure our numbers in the right place.

In my backpack I was carrying water with electrolytes, Nakd bars and SIS gels – all of which I’d been using on my long training runs so I was keen to avoid changing anything on the day. I’d enjoyed my long runs, many of them I’d done with ladies from the club. I’ll always be grateful for the hours that I plodded the pavement with those girls. As the distances had increased, I’d found that I’d needed to carb-load the day before to give me enough energy, and to be careful to include enough protein in the meal after. I’d also found that I was shattered afterwards and needed recovery time.

Erika and Sue from the club had both told me to start off slowly and build up speed. I don’t know if it was the caffeine or the atmosphere, but when the gun went off, all my plans seemed to go out the window and I got off to a fast pace. After 5 miles, I started to relax and slow down a little, but it was still faster than I’d planned. I think this was partly due to my fears of not hitting the halfway point in time.

The family were waiting for me at mile 6 which was great. In fact, all the way around, the marshals and supporters were out on the streets cheering us on, holding banners and sweets, so there was lots of support all the way. At this point I was sipping water and taking my gels and nibbling a little on my bars but I struggled to get much down.

The course was mostly flat with a couple of small hills. The route passed through parks, an estuary and lots of streets, so it’s ideal for anyone wanting to try for a PB.

The organisers had tried to make the race as eco-friendly as possible with biodegradable water pouches, paper carrier bags and no leaflets at the end – which I thought was an improvement. 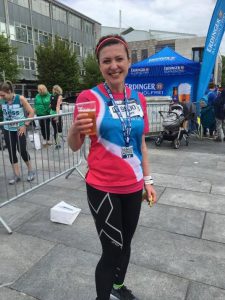 At 13 miles, the half marathoners finished. This was when the race got more serious for me as there were now fewer runners. I felt really strong and it was going well – albeit I was going quicker than I’d planned. Gareth was waiting for me with water bottles and flat Coke. I don’t normally drink it but it tasted great and gave me an instant hit of sugar and caffeine.

Although the course was quieter without the half marathon runners and it was a 2-lap course, the supporters were still outside their houses and there were ample marshals cheering us on. There were children with tubs of sweets and people shouting my name which spurred me on.

Mile 19 was when things changed and I hit the wall. I’d never experienced it before, but suddenly I felt sick and couldn’t eat or drink. My stomach was churning and I wanted to stop running. The Nakd bars tasted awful. Gareth was waiting for me and tried to chat but I could barely speak to him – I felt rough but knew I had to keep going, so I carried on running.

By mile 20, I walked up a hill and didn’t want to start running again. I felt like I had no energy left and running another 6 miles felt like an impossible task. The marshals were giving out caffeine gels at this point and despite planning on avoiding any unfamiliar gels on the day, I took one. It was worth a go! I ate a little, worried it was going to taste awful and make me ill, but it was nice – totally different and seemed to be just what I needed. I started running again slowly and managed to keep going. I knew I had to just keep running – the pace didn’t matter but I didn’t want to walk.

By mile 25, a lady caught up with me and we were chatting which made the last mile go quicker. I was feeling much better and didn’t even bother trying to eat anymore, but took on sips of water.

My watch was then saying that I’d hit 26.2 but there was no sign of the finish line! I asked a marshal where the finish line was and she reassured me that it was just around the corner – and there it was. I’d never been so thrilled to reach the end of a race – and I’d done it well within the cut-off time. The crowd was cheering so loudly, I felt amazing! I crossed the line and heard Gareth telling me to stop running – I think my mind had just been telling me to keep running so I’d kept on going!

I’d done it! I got my medal, t shirt and a non-alcohol beer which was delicious! I was beaming! I posed for a few photos and then realised how sore my rib-cage was. I’m not sure if it was due to my backpack or my dodgy bra, but I’ll never forget my sports bra for a race again!

I was so pleased that I’d got through the race and that I was a marathon runner. I’m still on a high now. It was definitely worth it and Southampton treated me well. I’m not sure whether I’d do it again – I’m looking forward to doing some shorter runs now and getting back to enjoying running just for fun.