HomeMarathonsThe best-laid plans of mice and men… my...

This was to be my 15th marathon and my 5th of the 6 Abbott World Marathon Majors (just Tokyo to go).

Training went well until week 8 out of 18. I ran 15 miles @11 min/mile. It felt good to be a couple of weeks ahead of schedule as this was followed by a week of travelling around Switzerland with no running planned.  I came back from my week off with hip pain but decided to get back into the programme with a 16 mile long run.  I managed the distance but due to more hip pain it was considerably slower.  I decided to see a physio to figure out what exercises I needed to do to get ready for the marathon.  The pain was getting worse each week, worst at night when I was walking around for hours, despite the fact that I’d now abandoned my marathon plan and was only running with the WRP beginners group.  The physio recommended having an MRI as the symptoms were confusing her.  The MRI showed that osteoarthritis was causing my problems and while I knew my left hip was bad and causing a lot of restriction, the right one was very inflamed, which caused the pain.  The consultant told me that it was bone on bone with hardly any cartilage left and that I needed hip replacements.

I explained that I hoped to do 2 more marathons (Chicago in October and Tokyo in March 2020) to complete the majors. He said that he should probably tell me that in his opinion I was unlikely to run a marathon, but as he knew what us runners are like, that it was not out of the question that I could run marathons again after the operations.  Although there were no studies done to prove that running those distances on new hips would wear them out, as there were different types of hip joints to choose  from for people who wanted to stay active, he recommended putting the operations off until next year, having a steroid injection now and perhaps another one before Tokyo.

I had the steroid injection straight after this consultation, which was on the 12th September. I guess the injection did work but only marginally and even small amounts of cycling, aqua jogging and even some physio treatments caused the pain to flare up. I took pain killers some nights just to get relief.

What to do?  As the flight and hotel were booked and paid for, and I knew the course was almost totally flat, I decided to give it a go. The physio advised taking painkillers 2 days before the race, the race and for 2 days afterwards.

My husband and I flew into O’Hare airport on the Thursday and I was glad of the escalators, as going up and down stairs was difficult. On the Friday we went to the expo to pick up the race pack. Security was strict but very well organised to the point where arriving at the designated point for my bib, etc. the volunteer already had it in her hands.  As I’ve been to many expos before and think the London one is the best, I didn’t stay long. The receptionist at our hotel recommended ‘Volare’ an Italian restaurant. It did not disappoint and we booked it for the next 2 nights. We very much enjoyed going to the theatre in the evening to see Hamilton. I rested on Saturday and did very little other than laying out my race kit and drop bag. 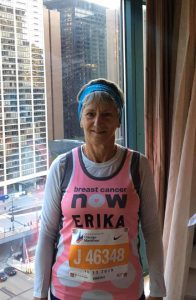 Sunday morning was very cold – about 1 degree centigrade – and I had to leave the hotel at 6 am as instructions were to get there by 6.30 for an 8.35 start. My start was orange in the 3rd wave and I had to hand in my bag for afterwards, which contained warm clothes to change into. I was not feeling great and started to feel nauseous, weak, lightheaded a kind of detached from reality and with an ocular migraine.  I took my pulse and found it very weak but rapid. I found a corner to sit down by a post to lean against and relaxed hoping this feeling would go away. After sitting there for about 30 minutes, I became aware of the cold travelling up my body and started to shiver, so felt it better to get up and walk.  I was still feeling weak, but my eyesight was normal again.

I didn’t join the huge queues to the portable toilets but walked to the holding pen which was without toilets.  Of course as soon as I was in there, I wanted to go: too late now. There was another 50 minutes to wait before we were moving forward towards the start. Just after we started moving, a side barrier was opened by a volunteer and a number of us spotting toilets down a slope, took this opportunity.  I started to feel better, but decided, that my funny turn had probably been caused by the pain killers and was not going to take any more.

GPS does not work for the first several miles in Chicago because of the tall buildings. As my aim was not a particular time but just to finish, my plan was to run 1 minute, walk one minute and repeat.  I did this for about 5 miles and then carried on jogging at the average pace between the walk/run. I took a gel at 3 miles, 5 miles, 13 miles and enjoyed looking at the different Chicago neighbourhoods and the amazing architecture……and then suddenly I felt weak, dizzy, nauseous and my legs wanted to crumble. It was at about mile 20 and I realised, that this was what they call ‘the wall’.  I’d read about it, but never in my previous 14 marathons had I experienced it.  I started walking, sipping on my gel and water and bit by bit I started to feel better.  Of course I had already been on my feet for longer than ever before.  I knew it was just a 10k to go and started jogging again, albeit even slower than before. The lack of training meant I had run out of stamina.

I was so worried about the cut off as my running slowed considerably and my confidence and fitness level were at an all-time low after not running for 8 weeks, but I made it with almost 29 minutes to spare and claimed my fifth world major ⭐️

Chuffed to pieces as my husband was there to celebrate with me.  All things considered it will be unforgettable! 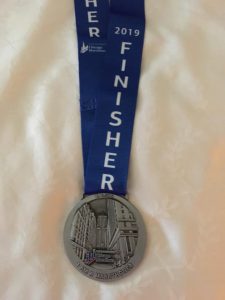 Important note:  This is Erika’s personal story that she has chosen to share.  Women Running Penarth is neither endorsing nor recommending that anyone runs a race – of any distance, let alone a marathon – with an injury or diagnosed medical condition which may be aggravated by the activity.  If you are experiencing pain or are injured, please seek medical advice before undertaking any physical activity.