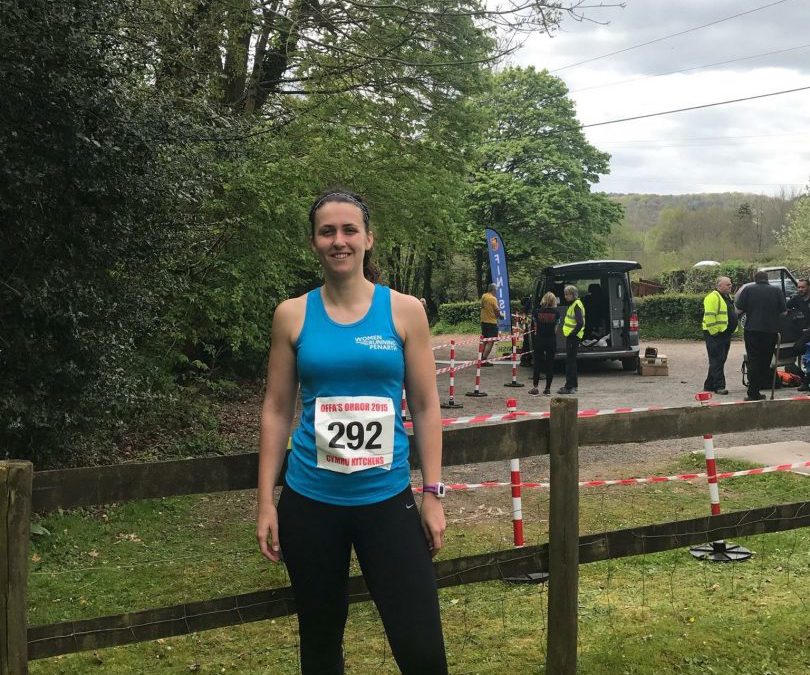 As part of my Man v Horse plan this year, I’m trying to do as many off road races as possible during training to get my body used to the terrain. When a friend from P&D suggested casually ‘ooh, do you fancy Offa’s Orror in 2 weeks, I hear it’s a good race’, I thought ‘why not’? I was due a 15 miler that weekend and a 12 mile jaunt through Offa’s Dyke sounded like a fair trade-off training wise, even a bit on the naughty side as it was shorter (hahahaha).

So Tania and myself left dreary Penarth on Sunday morning and pootled up the M4. Organised by Chepstow Harriers, Offa’s Orror is a 20k run through and around Offa’s Dyke and Tintern Abbey. It’s always held on the same day as the London Marathon, so you’ve always got that comforting feeling that however ‘orrible the race could be, at least it’s not 26.2 miles.

300 of us all started en masse, jostling up the country road enjoying lots of space to move around and then we followed the flour-marked arrows to a windy path where the first ascent started. Running soon became jog/walking as we filed single file up the dirt path. After about half a mile, we were rewarded with a gentle flat bit before another steady incline and another flat bit. This pattern followed until we got to a steep drop where we scrambled down the dirt towards the first water stop.

After a quick slurp, we picked up a flat grassy bit through gates parallel with the river Wye in glorious sunshine. A man who I’d carelessly sped past earlier then galloped past me and he slowed down as we both remarked at the view, which reminded me exactly why I love off-road racing. Another runner stopped to take a photo and I thought, ‘there are definitely worse things to be doing on a Sunday morning’.

Mile 4 gently turned into mile 5 (blackcurrant gel time – it’s good but still a poor man’s Ribena), then mile 6 and then we started climbing. And climbing. And climbing some more. Running turned into walking which then turned into pushing your knees with your hands. Some strange looks were thrown at us from some ramblers from the top but we kept on going up the hill. One stupid idiot (i.e. me) remarked to those around me that ‘at least we’re not doing London’ and some people politely laughed. I sure some other people decided to overtake me then to get rid of me. Once at the top though, the view was incredible and so so worth it.

Just before the next water stop, I found myself getting really tired and then, sure enough, I caught my left foot on a rock and went flying. I dusted myself off and started running again, not before having a check to see if anyone saw me though (no-one did, win!). Although I felt a bit bruised, I hadn’t cut myself and I was good to carry on, but it served as a reminder to pick your damn feet up as the forest always wins!

The next few miles were, as they always are in a longer race, a bit of a mental battle, but the view of Tintern Abbey in the sunshine at the next water stop was like a postcard and I couldn’t help myself but exclaim ‘oh wow’ at it. I trundled on to be rewarded by another stinking great hill but it was gel time again (apple, 4/10 not my favourite but sadly always part of the variety box) which meant hooray, mile 10! I sucked the contents of my gel down, pretending that I was walking to eat (not just walking to walk). With only a few miles left and a lady from Les Croups breathing down my neck (not for long, she soon passed me), I heard another voice pipe up behind me saying ‘why does it smell of kebabs in this forest?’. I was able to impart my wisdom and tell her that it was indeed wild garlic and we then had a breathy conversation about wild garlic pesto for a few minutes.

After another ‘orrible hill (in for a penny, in for a pound, you certainly get your monies worth from the organisers) we went down the bank, round the corner and across the finish line, where the lovely Chepstow Harriers had put on a tea and cake display far bigger than the Mad Runner’s Tea Party and ‘WRP do XC’ put together. Tanya crossed soon after and we marvelled at the size of the bruise on my knee (not that big, but big enough to warrant a little sympathy, and probably far bigger when described in conversation at a later date) and the size of the cake (medium sized but plentiful) whilst sat on the grass drinking coffee.

So, in summary, Offa’s ‘Orror was:

It’s also worth noting that Chepstow Harriers had it organised down to a tee, and not just the cracking race shirt.

I’m definitely up for it next year, even if it’s just to go and kick that blasted rock in retaliation for my fall. And before you ask, I know EXACTLY which one it was…