If I’m honest, I wrote most of this in my head when I was running; as I rode the wave of a million emotions I wrote and rewrote it multiple times. There were points in this race when I thought I may be a ‘DNF’ and my internal monologue sounded like a fudging obituary and other times where I was plodding along, doing alright and on plan. However, now I get to write this from the point of view of a finisher, I can finally say I’m an ultra-runner and actually admit that I did enjoy it.

So here goes, Grace’s epic tale of a quick jog down the Taff Trail armed only with a backpack stuffed what seemed to be the entire contents of my kitchen cupboard. Batten down the hatches folks as it’s going to be a long one…

First, the training… so much training…

Those that know me know that I’m bloody minded, sometimes to a fault. So, in order to celebrate turning 30, where most people would go out on the lash or throw a big party, I found myself wrestling with the thought of an extra special big challenge. My lovely personal trainer successfully put me off the idea of a triathlon when he gave me lots of old copies of triathlon magazines from when he was training for Ironman. Knowing that cycling wasn’t my forte and still scarred from my days wearing an all-in-one when I did dragonboating as a teenager (look it up but the clue really is in the name), the only sensible thing to do instead was to sign up for an ultramarathon. Turns out a lot of ultras require a certain amount of self navigation, definitely a key skill that I lack. For the sake of mountain rescue I opted for a non mappy race in the form of RunWalkCrawl’s Brecon to Cardiff Ultra; a 42 mile scenic jog that appeared relatively flat(ish). So with a training plan carefully selected at random from the internet, I found myself six months out from D Day grinding out the miles on a weekly basis.

As the months progressed and the mileage increased, my weeks basically turned into this:
Monday: Gym session with personal trainer – pick up heavy stuff and put it down again, a lot.
Tuesday: Run.
Wednesday: Run + more gym – pick up heavy stuff and put it down again some more.
Thursday: Run more. Put a wash on. Those socks stink.
Friday: Rest – kind of. Go to a yoga class and marvel at how terrible I am at it.
Saturday: Long run day! Also, parkrun day! Get up and start running at 0700 to get in some miles before doing parkrun. Grumble at how slow I am and then find any person who’ll take pity on me and is willing to keep me company. Run some more.
Sunday: Repeat Saturday’s mileage because it was just too much fun to handle for one day. Put another wash on because that laundry basket won’t shut again. 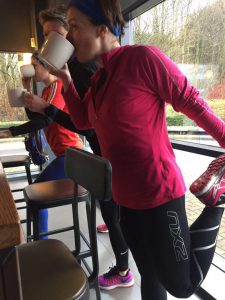 The 6 months were long, they were boring and the miles took their toll. I wasn’t totally injury free, but thanks to a scalable plan and Dr Liba’s impromptu physio sessions in Starbucks (see pic.), I knew I would get to the start line. All I needed to do was GET IT DONE.

I got past marathon distance, past 30 miles and past checkpoint 4. I was tired now, and a lovely lady took pity on me and trotted with me for a mile or so. I was feeling a bit off but she cheered me up and I was in awe of this being her 262nd race at marathon or more distances. I didn’t catch her name, but, nice lady from Swindon, it was lovely to chat to you and it helped me settle so thank you! My foot was a bit sore, so I let her go on. I was also walking a bit more than anticipated and my right second toe was doing a weird claw thingy. This carried on and got more and more painful until I really struggled to run and then struggled to walk too. I pulled to the side at Quaker’s Yard, taped it up and carried on, but a few miles later it really was getting unbearable. With my pace now unrecoverable, I knew now it was just about finishing at all, not in a specific time. Some guys asked me if I was okay and I blethered to them about my toe to which they went ‘Salt! Sounds like cramp, grab some crisps at the next checkpoint’. Another kind lady overheard and gave me some of her salt tablets which I took on board. This helped within a few minutes but the damage to my toe was going to be a factor until the finish now. Grumpy and sore, I had a call from Alice to say that the WRP funbus, (aka Jo’s camper van), fresh from an afternoon at Pontypool’s XC, was going to be at checkpoint 5 not at the finish as I was expecting. This was the best news I’d had all day! As I neared the checkpoint, I saw Jo waiting ahead and I felt my spirits lift. Lynne Ellis, Lynne Evans and Alice were there smiling away and Lynne Evans announced she was running with me to the finish. I was so happy! A few metres up the road was checkpoint 5: I shouted (or possibly mumbled incoherently) my number at the marshal and went into Trallwn Working Men’s Club where I hoovered up a cup of tea, some crisps and sausage and chips. Some runners were sat having a pint before carrying on, including my cramp saviours! I think I told them I loved them (this delirium was about to become a theme) and Lynne and I left the checkpoint…and promptly got lost. I got out the map provided by the organisers, we both looked at it blankly and decided it was no use to us and then followed some other runners instead.

I knew that just a mile further up the road Mr Newbould would be waiting at the pub so, at this point, I was wonky but happy. When we got there, he promptly threw some pretzels at me and, knowing I’d had a rough ride so far, he opened up the beer he’d bought for me to celebrate at the finish and I had a swig in advance. OMNOMNOMNOM, this was a very tasty beer. Lynne and I then carried on, and we ran/walked intervals past some old fridges and burnt out mattresses – definitely not the most scenic part of the route. To keep going, I’d pick a point to run to and we’d push until the pain was too much and then I’d walk again, one step forward at a time. A lovely man was stood a few miles from the finish on a rather lonely stretch of the Taff Trail proffering a bag of sweets. Whilst normally this would be a situation you would avoid, I happily took some sweets from him and it turned out he was waiting for a mate to come through, he said he’d done it last year and knew how hard it was. I also told this man I loved him before Lynne quietly ushered me away. The light started to draw in and I was determined to finish without having to get my head torch out. We turned a corner and I saw Jo’s lovely face again, and then I saw Alice, Jeanette, Lynne Sullivan and Lynne Ellis (we have a lot of Lynne’s in this club). Powered by their faces illuminated by the now lit street lights, I turned the corner to the finish line, saw Mr N’s face and the rest of my beer and started to sprint. Or not. There was no gas left in the tank but I got up to an incredible 12 min mile pace and powered over that line. I hugged all my friends and thanked them, even though I am not a hugger in any sense of the word. Normally I hate people touching me but I’d already told a strange man that I loved him so normality had gone out the window. It was DONE. 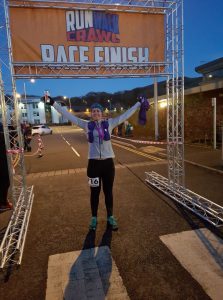 The finish – with celebratory beer!

I then partied the only way a WRP member can by sitting in Jo’s van with 2 cups of sugary tea, 4 pieces of cake, beer and a packet of cheese and onion crisps.

Welcome to DOMsville, population YOU. There was no recovery run for me the day after. Or the day after that. In fact, I didn’t run for 5 days and even then it was 5 miles of ‘interesting forward propulsion’ rather than anything that could properly be described as running. It also took me a full 6 days not to wake up starving and want to eat the entire contents of the fridge. However, a little later after the usual ‘never again’ was unttered and when sleeping in different positions didn’t involve having to manually move my legs, the questions did start to come into my mind:

What if I’d got my salt levels right?
What if I’d tried something different to eat?
What if I’d taken more water on board?
Those Hoka One One’s that bloke was wearing looked smart, would they make me quicker?

Put it this way, thank goodness that the Vale Coastal Ultra is already full.

(Main pic: Grace in training for the big one!)