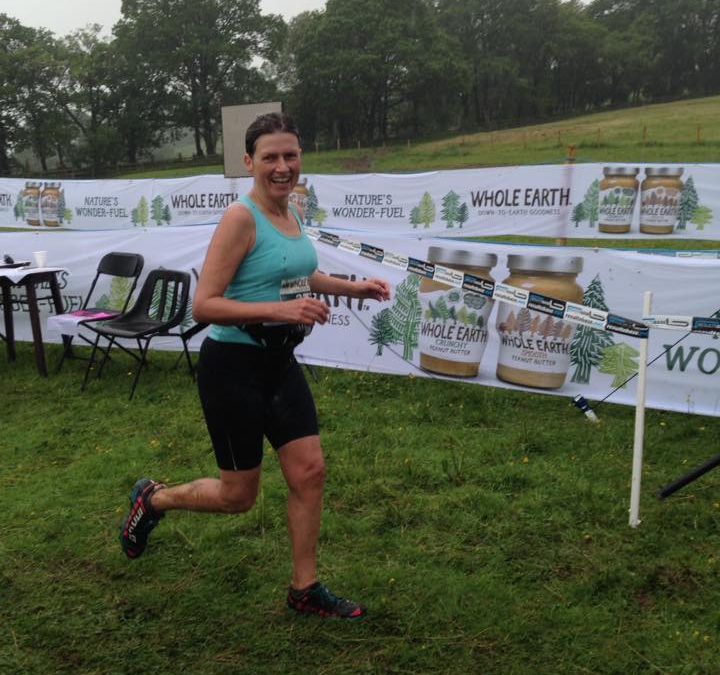 This year’s ‘stupid’ challenge was one I’d been wanting to do for a while but for a myriad of reasons I’d not got around to. Last year’s WRP heroes, Fi, Helen and Jo had done the full course along with Susannah who was having another go after conquering it the year before. Jo loved it so much she wanted to do it again so we both decided to go in for the full course this year, along with Lynne S, Lynne E and Sarah who were far more sensible and opted for the relay.

The Whole Earth Man V Horse ‘marathon’ is a 20 something mile course across Mid Wales where they set a load of runners off from the local pub into the wilderness, followed by people on horses 15 minutes later. Originally the race was set up to see if a man could beat a horse (which turns out that they can, on occasion). My aim of the race was to finish and any horses overtaken in the process were simply a bonus.

You don’t know the full course or the distance until the week before, therefore training is a bit of an unknown. I subscribed to the method of ‘Leckwith Hill reps until you die’ and as many off-road races as I could get my hands on.

After an eventful night of discovering  a terminal hole in the airbed and Jo having to borrow a gas bottle from some lovely Royal Marines, it was soon time to start and Jo, Lynne E and myself waited on the start line, ably covered by umbrellas by WRP’s support crew (aka Team Forghorn) – Helen, Helen’s daughter, Jo’s daughter and Susannah. 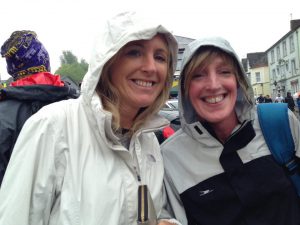 Susannah and Lynne S trying to stay dry before the start.

The starter horn went, Jo went far into the distance as is tradition (she doesn’t win prizes for no reason!) and we soon went up the first ascent. Soon after, the horn went for the horses and the familiar shout of ‘HOOOOORSE!’ and a quick shuffle out the way as they came through soon became a regular occurrence. I’d done the relay a few years ago but there is still something about the sound of hooves coming up behind you and these incredible animals sailing past that leaves me in awe.

The weather was really and truly terrible. I was soaked through within minutes and this didn’t stop for the next 5 hours. I also discovered that I use too much washing powder and suffered from what can only be described as ‘frothy crotch’. This provided me with much amusement and didn’t cease the whole way around. Due to the weather, streams had become rivers and bogs had become super bogs. Shoes were lost along the course, both equine and human, and it was really hard work. One of the real issues was trying not to twist your ankles in the hoof prints on the already boggy terrain. Even if you feel like doing a freewheel down a hill, there was a real chance you’d turn over if you missed your footing. Therefore, slow and steady was my adopted pace, knowing that I had a long way to go.

After the first changeover, Lynne E had the pleasure of a warm coach to the finish and I got to see Sarah’s lovely face which helped me mentally. Knowing we had WRP support at each third was really helpful in making me ‘reset’ my mind, even if my legs felt a bit tired. As we went through the checkpoint, fresh-legged runners overtook us but we kept on plugging away. Jelly babies were shared with strangers, a nice man informed me about the red ribbon meaning on horse’s tails (apparently it means they kick, quite useful information) and I discussed my frothy state with many others (‘There’s something on your leggings’, ‘I know, it’s washing powder, would you like a jelly baby?’, ‘Ooh yes please…well at least you smell nice’). 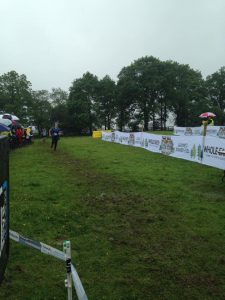 Grace and her frothy knickers heading to the finish.

After about 14 miles, I saw Lynne S huddled under a barn waiting for the changeover. I told myself to put my foot down, knowing that I’d managed to get this far without injury (no mean feat) and that I could start to push now.

…and then the massive hill/mountain appeared on the horizon. I passed a bloke having a bit of a grumble about it with his mate, and I shouted some words of encouragement to them. I got to the bottom, and it soon became clear that this was a walking mountain. A lot of us were having wobbles by this point, and I decided to discuss my planned Chinese takeaway choices for the evening with a lady in order for us to take our minds off the hellish mountain. She informed me of her tale of woe from the night before where she had forgotten the outer layer of her tent and had to sleep in a mate’s tent porch.

After the ascent, came the descent. Anyone who has done a long distance off road run knows that descent is a good way to make up time earlier in a race but later on it is a painful process. I passed a lady who had cut her knee up who was now probably going to DNF but was sat at the side in a donated foil blanket shouting encouragement to everyone passing. Everyone was checking in with her to see if she was okay and the next marshal along must have been getting fed up with everyone telling her about her again and again as they passed. With one final hill after this, I could hear the finish line and it was time to throw the kitchen sink at it. Every step hurt, but with a guy behind me shouting some Northern-accented encouragement at me I got on with it and even managed a half-sprint across the line. Medal on and waterproof coat handed to me ably by Helen’s daughter, I wandered over to the famous tea, cake and sandwiches stall and hoovered up at least 5 egg sandwiches in 2 minutes flat. After Lynne S crossed, we helped ourselves to as many free peanut balls as we could carry from the Whole Earth stall, had even more cake (in true WRP fashion) and then proceeded back to the car park.

We all agree that it was a bonkers race, and potentially the hardest ever Man V Horse as well, but it was the first race I’ve ever crossed the line and said straight away that I’d do it again. For such an iconic race, it’s super informal and everyone is really friendly. All the marshals are locals who are standing in the rain for hours for you, the cake and sandwiches are made by the local ladies group and everyone running it is more than happy to chat.

If you ever have the chance, I’d thoroughly recommend it. Just maybe do a few hill reps first and brush up on the horse ribbon code…and don’t use too much washing powder.