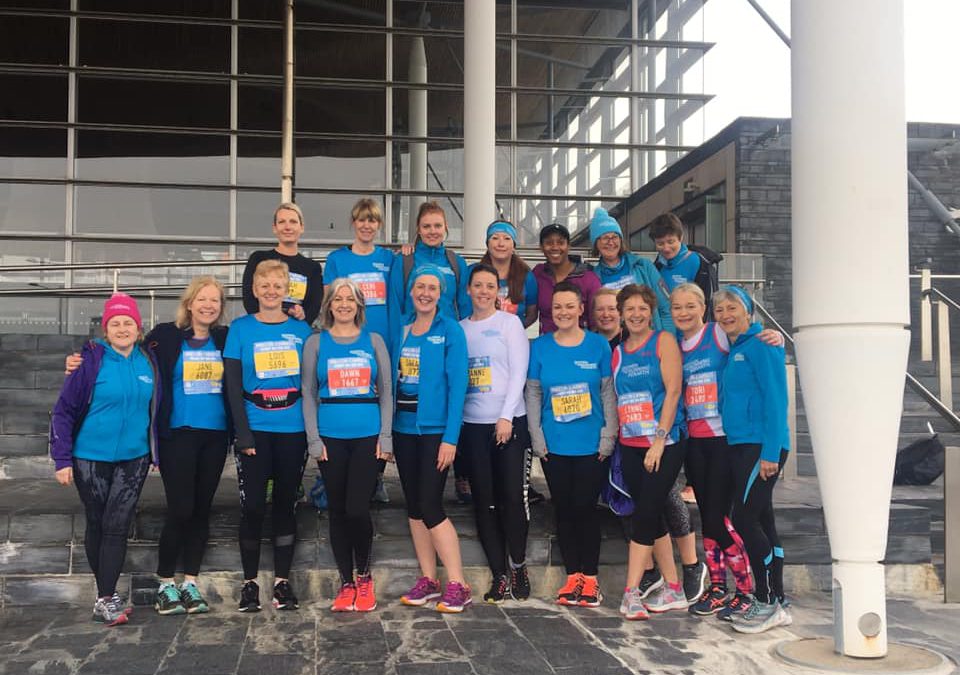 It was New Year’s Eve 2018.   I was getting ready to go out for the evening to see in 2019 with my nearest and dearest and enjoy a slap-up meal at the Custom House. More rich food, more wine, more partying….yippee!

Having squeezed myself into my best frock, I caught a glimpse of my side profile in the mirror. Shocked at the spare tyre around my middle, I changed into a different dress (nice and loose) and I made my resolution to get active and lose the Christmas ‘mum tum’ that had appeared over the preceding run up to the festivities, the previous Easter and if I’m honest, the previous Christmas too.

So when I opened Facebook to put a ‘Happy 2019’ message out to my friends and family, up popped a post from Women Running Penarth announcing a beginners group was to start on the first Monday in January and would train using the Couch to 5k technique.

It felt like fate. I’d always wanted to run, but I’d never stuck at it. I think I downloaded the Couch to 5k app about 5 years ago and probably used it three times. I even bought a book; ‘Run Your Belly Off’ by Runners World. But I just couldn’t stick at it. There was always a reason why I couldn’t run: I had to work late, I had to cook dinner, I had to do the ironing. I never found the time.

So I messaged saying I was interested and had a reply immediately. I responded to say that I had no latent running ability, that I was only able to run a bath and there was no way I could tackle 5k. Another reply – reassuring me that it would be ok, it was a 10 week programme and would gradually and gently build my fitness and stamina. Oh and I didn’t need to buy any expensive gear, just a regular pair of trainers would be ok.

So Monday 7th January dawned. I’d taken some time off my 40 hour a week job after New Year to spend with my 9 year old daughter before she went back to school the following day. We met up with her best friend and mum and took the girls swimming and marvelled at their incredible energy while we sat on the side drinking coffee and chatting.   My mum friend encouraged me to go to the first session that evening as my enthusiasm was beginning to turn to mild panic at the thought of running later that day. It didn’t help that it was a miserable day, wet and cold. Just the sort of night to light the log burner, dim the lights, fire up a box set and hoover up the last of the Quality Street.

So I turned up at Tesco at Penarth Marina resplendent in my 5 year old trainers, ancient baggy leggings and no waterproof as I just didn’t have anything suitable. I was greeted by the sweetest and kindest lady who introduced herself as Erika and asked me to wait with the others. I joined a dozen or so other women sheltering from the freezing rain, and began to trade stories; how we were all so unfit, some of us feeling nervous at what we’d be doing in the session, others worrying about how their young children would manage without them at home for an hour or so and if their partners could cope…

Erika joined us. She explained we would begin running for just a few brief minutes interspersed with walking. So gently we set off into the night, pounding the red brick pavements of Penarth Marina. Within a couple of minutes I began to breathe heavily, panting to my new found running buddies that this seemed a VERY long few minutes. But somehow we pushed on, many of us breathless, all of us wishing the running segment would quickly pass and that we could go back to a more comfortable walking pace.

Somehow we made it through that first session. At the end, Erika patiently answered our relentless questions about the right kit (she told us a good sports bra was more important than a pair of trainers), the importance of stretching after a run and that it would be ok. We would be able to do it. She was going to help each one of us to become a runner.

I went home chuffed to bits that I’d survived my first session. I felt tired and slept well which was just as well, as the next day I was given some bad news.   It was my first day back at work after the New Year break and my boss called me to say that my post was earmarked for redundancy.

The following day, still reeling from the news, I went for my second training session. And over the intervening weeks, my WRP friends – and we have become friends – have all listened as I shared my worries, fears and frustrations as we clocked up more minutes and began to achieve some proper distance. Our training sessions were the best therapy as many of us waxed lyrical about our woes and always at the end of runs we would be laughing and feeling so much better. The running helped me overcome my acute anxiety about my pending unemployment and was a way to channel my frustrations.

Within five weeks, we had smashed our way through the Couch to 5K and many of us ran the Grangemoor parkrun in early February. Erika paced us and we all completed the course; the Ikea breakfast that followed was sublime (oh, and the appearance of the dishy doctor Ethan Hardy, aka actor George Rainsford, from Casualty was an added incentive to cross the finishing line as elegantly as possible). After a couple more parkruns some of the girls signed up for the Cardiff Bay 10k… so I joined them.

Sarah with her running coach and biggest supporter!

Those doing the 10k began to meet outside of the club sessions for longer runs and 2 weeks before I managed to complete 9.3km, a record. The following Saturday, just 8 days before the Cardiff Bay 10k, together with my 9 year old daughter on her bicycle, we did my first 10k. I never thought that I would be capable of entering a race but last Sunday, there I was at the start line for the Cardiff Bay 10k.

The cold weather really suited me as I get very hot and red when I run, but the icy blast against us as we ran the return leg of the Barrage was tough. Somehow I got to 7km but I felt like I had nothing left. I could hear Erika’s voice in my head: “Don’t walk, don’t start walking! Just slow down but you must KEEP RUNNING!” as I fought every instinct to drop to a walk. Somehow I carried on running. The supporters screaming and shouting “Come on Sarah! Keep going!” then seeing my daughter jumping up and down with excitement as I passed the 8k mark seemed to spur me on (even our cocker spaniel looked suitably impressed as I huffed and puffed my way past them.

I crossed the line at 1:05:55 and burst into tears as I looked up and saw family screaming their delight. I’d done it, I couldn’t believe it. By training with the beginners on a Monday and Wednesday evening and doing a third weekly run on my own or with a couple of the WRP girls, I’d managed to build my resilience to the point where I had run for over an hour.

Elated I went home to celebrate Mothers’ Day with my own parents, helping to cook a roast dinner, on a massive high. The next day, I felt tired but amazingly fairly ache-free and then did a gentle recovery run with Erika and girls on the Monday evening.

So what next? Now I find myself contemplating the Cardiff Half Marathon. It will take every ounce of everything I have, but maybe I can do it. If anyone can help me do it, then WRP can. We’ve made firm friendships, we’ve encouraged each other, fixed problems and talked and talked some more. I’m certainly not a natural, I’m a plodder. But I’m now a runner. Thank you ladies.

Main pic: Sarah with the rest of Team WRP before the race.