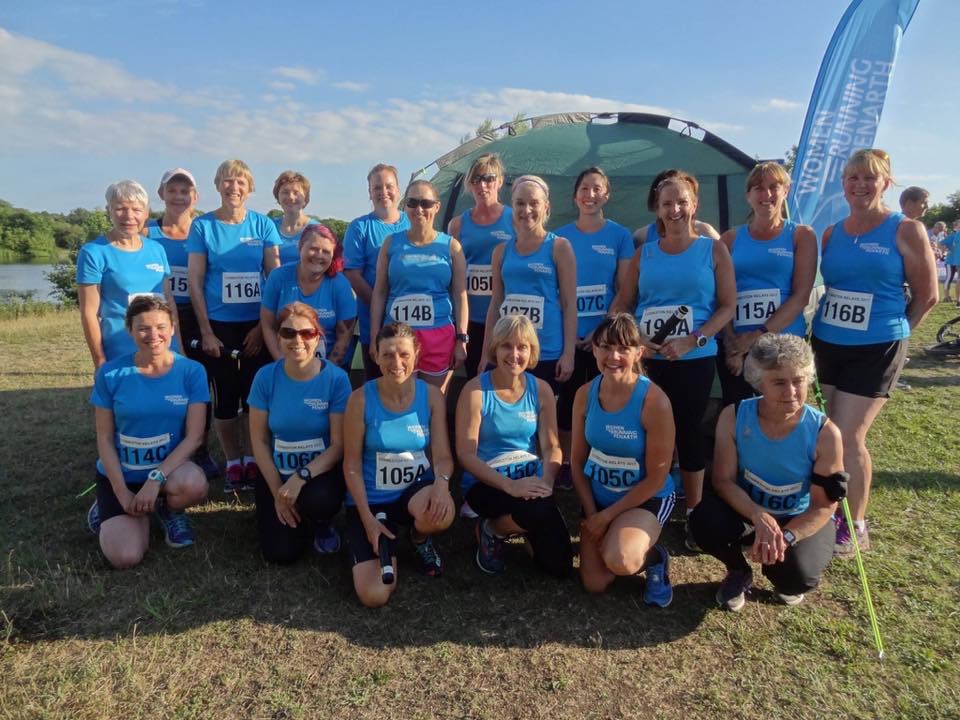 There were, let’s just say, some differing opinions about the course. Us newbies were feeling under pressure as WRP had managed to secure 7 team places. Whilst initially I had thought it a good idea, as “it’s only 5k”, it got closer and I suddenly realized that this was a race, not just an event.

In a 10k, a half marathon, or even a marathon, no one expects you to come in the top 20, it’s just you against your mind and your legs. Just finishing is an achievement and even if you have a time in mind, you don’t have to verbalise this if you miss it. You might be inwardly disappointed, but the vast majority of the population will still be impressed that you dragged yourself out of bed on a Sunday without (or perhaps with!) a hangover to run for a few hours. Now other women were relying on me to get round the course in a decent time and take on the baton so that our team could finish. No one expected to win, but it would be nice not to be last!

The evening started with a new greeting: “Hi, I’m …….,, sorry, I’m really slow”. We were grouped into age categories and Erika had installed our WRP tent next to the ambulance – I hoped this wasn’t a sign! We had a WRP team photo in the sun. There were lots of different teams with differing approaches to the relay and I love all the coloured vests, like many tribes coming to a meeting. 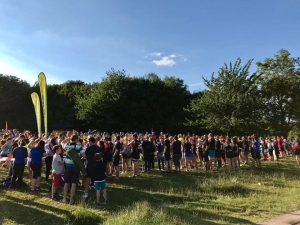 The tribes gather at the start.

The concept was explained and we all realized we’d never practiced a baton handover. No time to discuss……fingers crossed! Away the first runners went. The rest of us moved to the mile marker to cheer on the first runners. #TeamFoghorn in action. The first man through the mile was under 5 minutes – crazy fast. We then had the pleasure of seeing all the first runners through – yelling at them with great enthusiasm. Most support crews stayed until the last runner was through the mile mark and it was great to see so many smiling faces on that lovely evening. We then made a dash for the change over zone. Second place runners were all in the pen and then gradually teams started arriving – the numbers were shouted out. I knew roughly what time my teammate would do, yet I still found myself jostling anxiously way before that – anxious that I wouldn’t get to the front of the pen or that I would drop the baton.

Our team numbers were announced , I got through and saw Jo’s delight at finishing (or maybe just being able to go on holiday?!) and then I was off and running – baton safely in hand, I tried to remember to hold it vertical over the sensors and then the first few hundred metres were a bit of a dash thorough the long grass and everyone I took off with realised that they were running too fast – pace yourself! The course was uneven underfoot with grass, path and some woodland. It was a nice mix and a challenge. It was also shady thankfully. I enjoyed it a lot more than I thought and chased down a Rhondda Valley runner all the way round. I was overtaken by another WRP member and tried to keep her in sight. We were overtaken by third runners in the fast teams and there was a polite giving way of the slower runners to those you could hear bearing down on you. I passed the 800m to go sign and finally overtook the woman from the Valley – she shouted well done at me and wished me good luck for the finish. A final 50 metre sprint and the baton was safely in the hand of our third and final runner Claire – phew! I was so pleased to be finished and clocked my best 5k time this year.

WRP runners congregated near the finish line and we cheered our final relay runners in and clapped and cheered all people finishing. There was a great sense of achievement and I think everyone was quicker than they had declared. The sunset was beautiful and it was a lovely evening to be out enjoying running and I felt very much part of a team, rather than an individual runner from a club. Everyone was proud of everyone else and that “runderful” feeling was easy to see.

One of our teams came second in their category and one came third and more importantly, none of us were last. There were many congratulations and discussions of other events we might enter. The event was definitely a team success and I think many would run it again next year – we should take a picnic (or at least some fizz).

That’s what I love about running, but more specifically about WRP. Even if you aren’t looking forward to something, you definitely feel better afterwards and it’s so much nicer to be able to share that experience with others. I joined the club having moved to Cardiff when I didn’t really know anyone. I’ve met some really great and inspiring women and love the way that everyone supports each other. It is really encouraging, no matter how fast or slow you are; the achievement is recognized. It’s not about being faster or better than someone else – it’s about being better than you used to be – that to me is runderful.