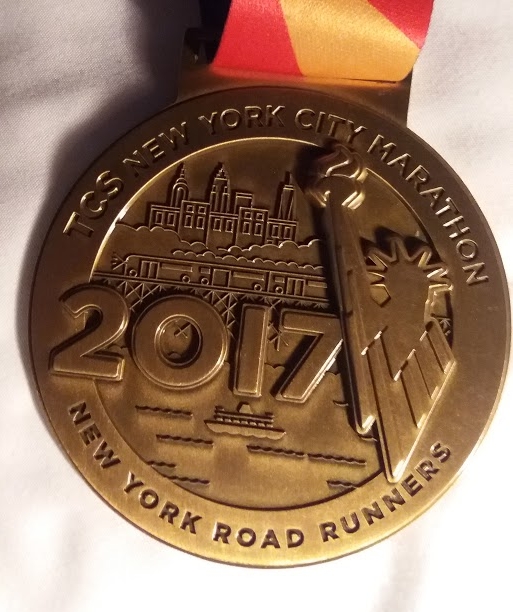 I was very excited when I got a ‘good for age’ place in the New York City Marathon as this was going to be my 4th World Marathon Major after doing London in 2010, Berlin in 2013 and Boston in 2015. Preparations started over a year ago. When running overseas, it’s not just the training that you have to take in to account, the ‘incidentals’ such as travel arrangements can appear unimportant but, if they go awry, can spoil the whole experience, so I put considerable planning into them. My husband Jim always comes with me to marathons and I wanted the weekend to be a good experience for my ‘running-widower’ husband too, so planning included booking a Broadway show and a trip up the Statue of Liberty.

My training for the marathon started in a very relaxed way at the beginning of the year as there was plenty of time to build up mileage. Unfortunately I suffered a small stroke at the end of January, which put a spanner in the works. I suffered from headaches, double vision and nausea so I was not able to run for a few months. Once I was running again, it was a matter of building up slowly, starting with 10 minutes gentle jogging. Over the months I increased the mileage and managed to complete a couple of 22 mile long runs in October. I had a check-up by the neurologist, who was happy that my general health was OK, but an injury to my right foot, which had not healed for several months was slightly disconcerting. But, after all of the planning and training, I was determined to run even if that meant taking painkillers on the day. 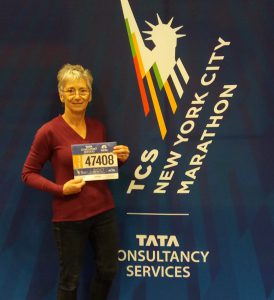 NYC Marathon is a huge event: it has an army of volunteers – 10,000 looking after over 50,000 runners – and is really well organised. Free buses took us to the Expo convention centre on 11th Avenue to pick up my number (they call it the bib) and sign up for transport to the marathon start on Staten Island. Registration was very quick. I was advised to take the 7 a.m. Ferry option and was given an armband. Buses were available to get people to the ferry but this would mean leaving our hotel at 5.30am! So I opted to take the subway, as I was told that the journey from the Grand Central Terminal to the Ferry would only be 8½ minutes. During registration, there was also a choice to either have a drop bag or a poncho at the finish. It is definitely worth taking the poncho option as it comes with a lovely warm lining, which you really appreciate when you have to walk for rather a long time after finishing. There were many exhibitors at the expo. I didn’t purchase any of the expensive items, but was happy with my free participants’ tee-shirt.

That evening we wandered over to Broadway to take in the atmosphere and to see Miss Saigon, which we really enjoyed. Then on Saturday we saw New York from the open top of the ‘Hop on – Hop off’ bus. It was a sunny but cold day and we should have worn warmer clothes, but it was definitely worth it. Saturday night we met up with friends and their partners from Penarth and Dinas Runners and had a carb-loading dinner together.

Sunday morning, I woke at 5.00am and had my breakfast and wandered up to the subway. I had to wait for almost half an hour for the right train and the journey was 25 minutes (so much for the 8½ minutes I’d been advised!). So I arrived at the ferry terminal at 6.30am and was immediately waved onto the next ferry. 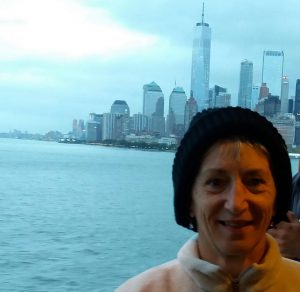 Always get a passing reporter to take your photo!

As we set off, we soon saw the Statue of liberty and I asked a young man whether he would take a picture of me, which he did and I found somewhere to sit for the journey. Soon afterwards I realised that my photographer was actually the reporter from ABC News and had a camera man with him. He started to talk into the camera about the marathon and its history and how many countries were represented. He seemed to be intent on revving up our spirit and there soon was a real party atmosphere. We felt very safe on our journey to Staten Island as either side of the ferry were police boats with machine guns on them and helicopters overhead.

The walk between the ferry and the ½ hour transfer by bus to the sports villages was very slow, but eventually we arrived and had to choose which start to go to. The ‘bib’ shows which start is allocated to you, orange, blue or green and also indicates which wave A,B,C,D, E, F or G. It is determined by the time you’ve indicated you expect to finish the marathon in. My Start was orange wave E. I decided to go as far back as I could, as I did not expect to finish as quickly as I’d said when I registered.

There is a fantastic sense of camaraderie among the waiting runners who wore anything from old jumpers to dressing gowns to stay warm during the wait. You hear many languages spoken – we were told 139 countries were represented. For the start of each wave the Frank Sinatra song ‘New York, New York’ was sung and a cannon ball fired at Fort Wadsworth making everyone jump and wake up to get going. My start was on the top of the Verrazano-Narrows Bridge which connects Staten Island with Brooklyn. The marathon goes through all 5 boroughs of New York: Staten Island, Brooklyn, Queens, Manhattan and the Bronx. There are many bands or individual musicians along the route and the residents are rightly proud of their boroughs and display signs welcoming you to them, shouting ‘Erika is entering Brooklyn’, or ‘Welcome to Manhattan Erika’. It is definitely worth having your name written on your running top: I even heard: ‘Erika: Smile, remember you PAID to be HERE’. There is absolutely amazing support all along the route, the only exception being on the long Queensborough Bridge which connects Queens and Manhattan at about mile 16. There were so many signs to urge you on: ‘Worst Parade ever’, ‘New York is with you’, ‘Run fast and take chances’, ‘You run better than our government’, ‘Blisters are Braille for Awsome’, ‘Run like you stole something’ are some I remember.

I had a sharp pain in my left shin bone about half way through the marathon, but then I saw a sign saying: ‘Oh Hell! You’ve come so far…you may as well finish’. Thinking of all my friends and family who were rooting for me, I was digging deep and managed to carry on and finish the race in Central Park albeit not in the time I had hoped to achieve.

We were given a goody bag and plastic sheet to hold in any warmth until we either got our poncho or the drop bag. We were all very glad of them as it had been raining on and off and we were very wet, but had to walk about a mile out of the park.

It was tough, it was wet, it was a very early start to the day but I did it! (And, I even got a qualifying time for Chicago 2018!)