The London Landmarks Half Marathon by Bron Calnan 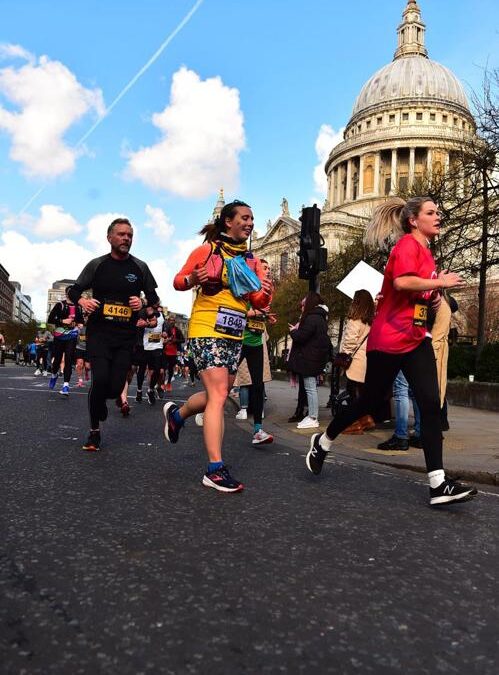 Following the cancellation of the Bath Half, I was left contemplating which race to do for my chosen charity: Dogs Trust.

I decided to run the London Landmarks after club members Rou and Donna recommended it. Another tempting thing was the amazing medal and t shirt that the event gives runners each year.

The magical thing about running  in London, is the atmosphere.

Before the race we could request a song to be played whilst warming up and before I set off I found myself dancing to ‘Shake it off’ by Taylor Swift.

At the start I met a Bristolian runner who was as shocked as I was being in the fastest wave. So we spoke to one another for the first few miles.

On the third mile I was greeted by a musical choir singing the best show tunes. I found myself singing along to some classic songs from sister act.

This race was very colourful and the one to be in for fancy dress. On many occasions during the race I found myself being chased by people dressed up by famous landmarks on the course.

The route as expected was nice and flat and a perfect opportunity to get a PB. My only recommendation is not to trust the pacers, they weren’t accurate.

Overall the race was amazing, it’s a perfect distance, if you want to do a bit of shopping or do a bit of tourism.

When the ballot is released, I’m entering again, it would be great to see a few WRP members out on the course next year  Just not in the lightning wave